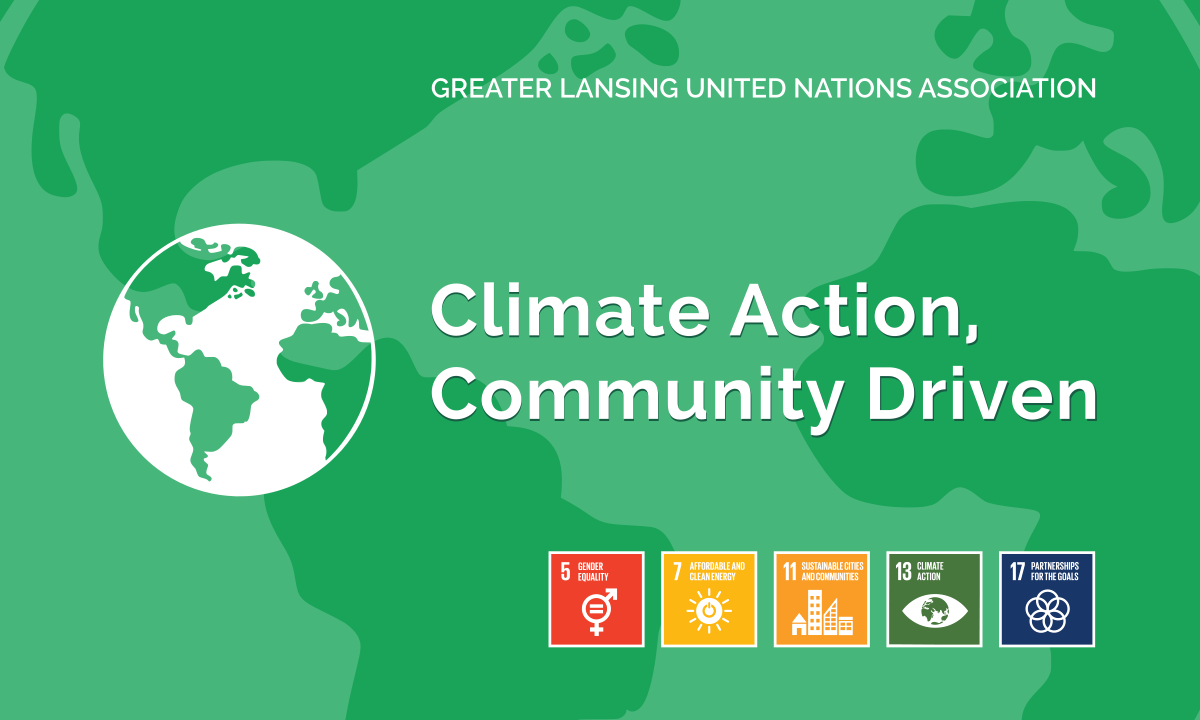 Join GL-UNA for a discussion on the accelerating climate challenge. Everyone is welcome!

We will focus on the following: what can communities do to address climate change? What are the barriers? How can citizens move local governments to take action? What are the realm of possible policies, actions that are already being used in other communities? Dr. Missy Stults is the Sustainability and Innovations Director for the City of Ann Arbor. In this role, she works with all city operations, residents, businesses, the University of Michigan, nonprofits, and others to achieve a just transition to community-wide carbon neutrality by 2030, as outlined in the A2ZERO Carbon Neutrality Plan. Prior to joining the City, Missy worked with cities and tribal communities around the nation to advance their climate and sustainability goals, including during her time as the Climate Director at ICLEI-Local Governments for Sustainability and as a consultant to philanthropic organizations. Missy has a PhD in urban resilience from the University of Michigan, a Masters in Climate and Society from Columbia University, and undergraduate degrees in Marine Biology and Environmental Science from the University of New England. Annabelle Wilkinson is the Environmental and Climate Justice Specialist at the City of Grand Rapids. In this role, she supports the inclusion of climate change and climate/environmental justice across City of Grand Rapids’ planning. Over the next two years she will lead the co-creation of City of Grand Rapids Climate Action and Adaptation Plan alongside community. Prior to joining the City, Annabelle worked on state-wide urban planning projects across the sectors of housing, transportation, and climate adaptation while at Michigan State University and promoted coalition building and neighborhood revitalization with Habitat for Humanity. Annabelle has a Masters in Urban and Regional Planning and a Bachelor’s degree from Michigan State University. Kate Madigan has directed the Michigan Climate Action Network (MiCAN) since 2015, Kate has helped lead coalitions to shut down Line 5 and the effort to prevent the state from allowing an oil tunnel; to get Traverse City to set the first community-wide 100% renewable energy goal in Michigan; and to organize the largest climate events in Michigan. Kate previously was the Deputy Policy Director for the Michigan Environmental Council in Lansing, and led a national safe food campaign based in Los Angeles for Environment America. She holds a bachelor’s degree from the University of Michigan School of Natural Resources and the Environment and a master’s degree from the School for International Training in Vermont after she studied and worked in Central and South America. Kate is a Michigan native with ties across the state – her family is from Detroit and Flint, and she now lives in Traverse City with her husband and two children.